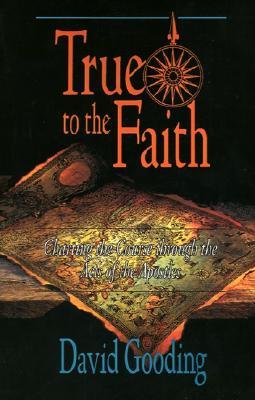 True to the Faith, Charting the Course Through Acts of the Apostles by David Gooding, Gospel Folio Press, 1995.  (It looks like it was re-published by another publisher, Myrtlefield House, in 2013 but I have the 1995 edition.) Available here.

Update: I shared this post with Phillip Long, a professor who is well known for his reviews of Bible commentaries and his own thoughtful posts on the Bible. Professor Long was unfamiliar with Gooding but discovered that his books and notes are available free, including a PDF of True to the Faith! See HERE which is Myrtlefield House, and click on Acts.

This is another book I finished late in 2019 but wanted to review. This is a commentary on the book of Acts, but it is different than your typical commentary. It is more like an “argument” for Acts, that is, it traces the development of the author Luke’s thought process as he recorded these early years of the church. What was Luke’s purpose for writing? How does Luke’s literary structure relate to the key points he was trying to make about Christianity? If this sounds dull, it was not. I found it a refreshing read and definitely recommend this commentary to you!

While it did not follow a verse by verse format, it did carefully go through Acts section by section. It brought Acts to life, and I really got a sense of the different problems Christianity faced as it began to branch out. As you begin to better understand these issues, you realize how relevant many of these things remain today! While the details and cultural circumstances are different, Christianity still struggles with the same underlying problems and temptations to drift from essentials of the faith. Notice the title for this commentary: True to the Faith. Will we stay true to the faith?

Through the centuries “Christendom has shown a marked tendency to lapse into forms of Judaism and to confuse the gospel with the very things from which the apostles insisted it should be kept distinct.” (page 19) – As Christianity expanded, it took increasing steps away from Judaism, and also defined itself in contrast to pagan spiritism, politics, and philosophy.

“Christianity was not launched on the world as a fully worked out sysyem of doctrine and practice, accompanied by a divine directive that from 2 am the next Sunday all believers in the Lord Jesus everywhere were to cease practicing Judaism and begin practicing Christianity. No, Christianity had to grow and develop…” (page 16) – Gooding sees Luke not simply recording the numerical and geographical spread of the gospel, but “describing for us what the gospel was, and how it came to be defined” and particularly how it diverged from Judaism.

Of interest, I am currently reading a book entitled A Practical Primer on Theological Method (by Kreider/Svigel) and it connects here. How do Christians decide things about their beliefs? As we see in Acts, Christianity had to grow and develop. This book by Kreider and Svigel is an introductory book on theological method. I will review this book soon. The authors skillfully and creatively introduce theological method. Available here.

In close, I want to focus on antisemitism. This commentary on Acts emphasizes how Christianity moved away from Judaism. However, it is in no way implying that it is okay to be antisemitic! The subject is brought up several times in the book, and there is even an appendix in the back addressing it. Gooding wanted it to be clear that Christianity can NOT be antisemitic, and it is sad and disturbing that antisemitism developed in Christianity and it led, in part, to the Holocaust.

Interestingly, when I was reading this Acts commentary, I was also reading a book on the Holocaust: Hitler’s Willing Executioners (by Goldhagen) and it reviewed this antisemitism from within Christianity, and a particularly virulent strain of it that developed in Germany. In one sense, this antisemitism is strange to me as I grew up in a type of Christianity that was very pro-Jew and pro-Israel. While Jews do need to realize Jesus as their Messiah, they were nonetheless respected and honored as God’s special people. They brought Jesus to us, and it was God’s eternal plan for Jesus, God the Son, to die on the cross for the sin of the world. But we can not deny that antisemitism did develop in Christendom, and it never should have been so!

Sadly, antisemitism is on the rise worldwide.

January 27, 2020 is the 75th ANNIVERSARY OF THE LIBERATION OF THE GERMAN NAZI CONCENTRATION AND EXTERMINATION CAMP AUSCHWITZ.

Please pause to remember, and to pray for the protection of Jews worldwide.

Follow the Auschwitz Memorial on twitter: @AuschwitzMuseum  – The world must not forget what happened to the Jews.

The Pew Research Center released a study on January 22, 2020 entitled: What Americans Know About the Holocaust.

⇒ Please consider sharing this post. Thanks! Buttons below.

1 thought on “True to the Faith, book review on Acts (with thoughts about the Holocaust)”