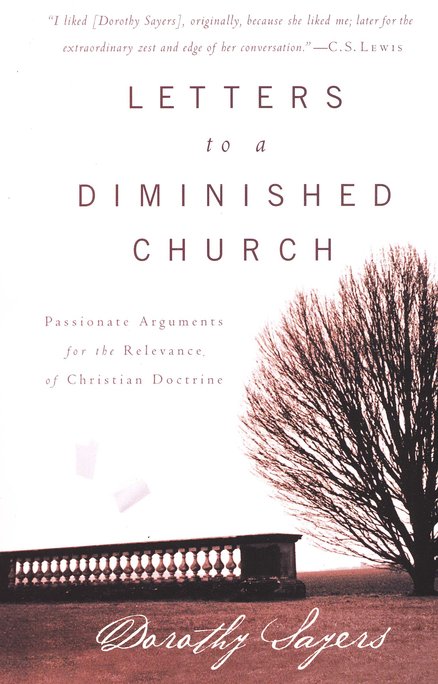 I read this book later in 2019, and still wanted to review it. The title speaks for itself, the book being exactly that! It is a collection of 16 essays about why the church desperately needs to refocus on doctrine, as doctrine impacts all of life. If you are not familiar with Sayers, she was a British Christian, scholar, author, and friends with some of the Inklings such as CS Lewis. She is known for writing both non-fiction and fiction, the later would be the detective stories featuring Lord Peter Wimsey. I review another of her books here: Are Women Human?

Sayers has been described as being in a class by herself. She is! She is skilled with wit, that is – intelligent humor, writing things that are clever or funny, making wisecracks – yet not in a way that detracts from a serious topic, but helps the concerns become clear. She is incisive, getting to the heart of a matter!

Only one essay of the sixteen did not hold my interest, only because it was about allegory. It really is a good chapter, but it seemed it would be more interesting if you were taking a class about allegorical writing.

Even when she writes about things happening during the WW2 years, it remains relevant to our day. In fact, some of it is even MORE relevant today! Conspicuous consumption, I’d say, is more of a problem. And the availability of cheaper goods has created an even more wasteful society. During WW2, people were forced to economize and be more thoughtful consumers, and Sayers wondered if people would return to their wasteful ways after the War. Sadly, they did.

Christian belief indeed affects all of life – our spending habits, our employment, the arts, etc. One chapter is entitled: “Why work?” Christians can see work as primarily about earning money or something that we hasten through to have leisure time; rather than seeing our work as an expression of creativity in the service of society and of God. Secular vocations are also sacred, and we serve God in our work. “I am persuaded that the reason why the churches are in so much difficulty about giving the lead in the economic sphere is because they are trying to fit a Christian standard of economics to a wholly false and pagan understanding of work.” (page 126)

One essay is entitled “A vote of thanks to Cyrus” and Sayers skillfully critiques the methods that modern textual critics of the Bible use to pick the Bible apart as real and reliable history. These critics would never dream of taking their methods and applying them to a memoir or biography written about someone from the last 50 years. “The root of the trouble is to be found, I suspect (as usual), in the collapse of dogma.” (Page 191)

And with that I want to focus on the pervading theme of the book, no matter the issue being discussed. There are SO MANY quote worthy things! Read the book!

“It is worse than useless for Christians to talk about the importance of Christian morality unless they are prepared to take their stand upon the fundamentals of Christian theology. It is a lie to say that dogma does not matter; it matters enormously.” (page 45). That begins the chapter, appropriately entitled: “Creed or chaos?”

Without creed, there will be chaos!

Sadly, too many Christians don’t really understand core Christian beliefs, and consider doctrine to be boring or irrelevant. This is shocking because Christian belief is the farthest thing from dull, and incredibly relevant. God became a human being, died, and came back to life! This is remarkable, astonishing…a grand and amazing story! It changes everything about life. And Jesus was anything but a dull man when he walked on this earth, often saying things that got people riled up – especially the religious folks!

“We have very efficiently pared the claws of the Lion of Judah, certified him ‘meek and mild’, and recommended him as a fitting household pet for pale curates and pious old ladies. To those who knew him, however, he in no way suggests a milk-and-water person; they objected to him as a dangerous firebrand.” (page 4)

Many Christians need to be re-introduced to Jesus and essential Christian truths about His person and work. And too many people reject “Christianity” but what they rejected wasn’t actually Christianity!

“Let us, in heaven’s name, drag out the divine drama from under the dreadful accumulation of slipshod thinking and trashy sentiment heaped upon it, and set it on an open stage to startle the world into some sort of vigorous reaction. If the pious are the first to be shocked, so much worse for the pious – others will pass into the kingdom of heaven before them. If all men are offended because of Christ, let them be offended; but where is the sense of their being offended at something that is not Christ and is nothing like him? We do him singularly little honor by watering down his personality till it could not offend a fly. Surely it is not the business of the church to adapt Christ to men, but to adapt men to Christ.
It is the dogma that is the drama – not beautiful phrases, nor comforting sentiments, nor vague aspirations to loving kindness and uplift, nor the promise of something nice after death – but the terrifying assertion that the same God who made the world, lived in the world and passed through the grave and gate of death. Show that to the heathen, and they may not believe it; but at least they may realize that here is something that a man might be glad to believe.” (Pages 19-20)

Get excited about Christian doctrine my friends! I recommend this book!

IF YOU appreciated this book review, please consider sharing it. See buttons below to share with ease. Thanks!

3 thoughts on “Letters to a Diminished Church: Passionate Arguments for the Relevance of Christian Doctrine. Dorothy Sayers book review.”