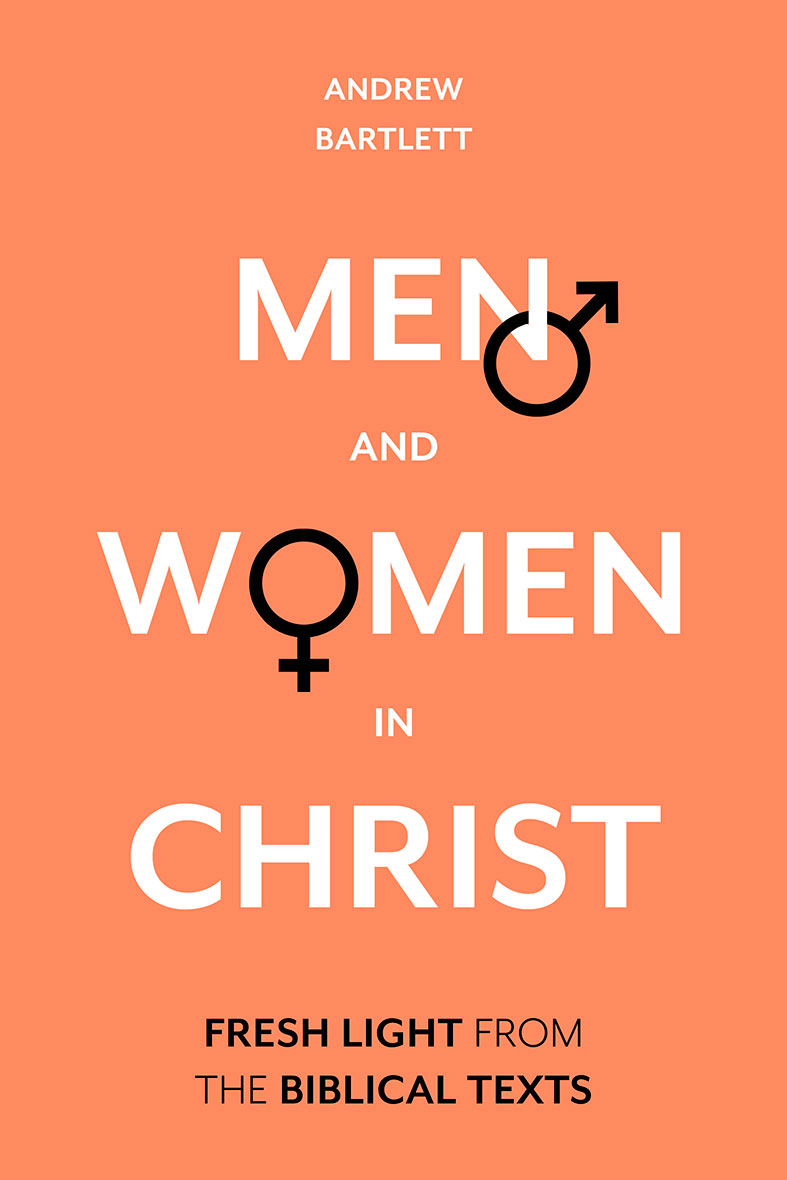 An entire shelf of books in my library is dedicated to the issue of women in the church and home. Many are exceptional. Could yet another book have fresh light or just be written from a new approach? Yes! This review is for: Men and Women in Christ, Fresh Light From the Biblical Texts by Andrew Bartlett, Inter-Varsity Press, 2019.

My reviews can be rambling, and this is a 400 plus page book. I rate it 5 stars. It is a tremendously helpful contribution to the debate that rages in evangelicalism over the role of women. The author Bartlett is concerned that the sharp divide between complementarian and egalitarian viewpoints has harmed the unity and witness of the church. He has a degree in theology but his career has been in the field of law, and his specialty has become arbitration. A judge or arbitrator is different than a lawyer. A lawyer represents one side, but an arbitrator seeks to be neutral, listens to both sides, and must go where the evidence leads. Bartlett wanted to take an arbitrator approach to the egalitarian/complementarian divide. Most books are written more like a lawyer defending one side, but I think Bartlett has successfully stepped back, assessed both sides as neutrally or objectively as possible, and shared his conclusions. That is what makes the book a unique stand-out.

He interacts a lot with Grudem on the complementarian side, and Payne on the egalitarian side since both of these individuals are solid examples of the reasoning for their respective positions. However, Bartlett focuses less on their disagreements with each other and more on whether their proposed interpretations accurately reflect Scripture. Bartlett uses what he calls 7 tools to properly interpret Scripture: primacy of Scripture over tradition, paying appropriate attention to culture, going back to the source language in context, coherence, a Christ-centered canonical approach, spiritual openness, and practical wisdom.

Bartlett is a careful and thoughtful thinker and writer. No one could accuse him of not being clear! Sometimes a writer can go overboard trying to make points clear, and it ends up annoying. Not Bartlett. He is clear in a helpful way.

No one could accuse Bartlett of not being thorough. But again, not in an annoying way, but as someone wanting to come to accurate conclusions based on all the available passages and evidence, rather than glossing over certain things. He leaves no stone unturned. Chapter 2 is on 1 Corinthians 7. He notes: “Despite the prominence of 1 Corinthians 7 as the longest discussion of marriage in the New Testament… complementarian analyses have tended to overlook it or downplay it.” (page 29) A deserved criticism! Maybe complementarians tend to do so because “the hammer of 1 Corinthians 7 breaks into pieces the rock of marital hierarchy.” (page 28) Bartlett was not willing to overlook or downplay passages. Other chapters in the book cover: Genesis 1-3, 1 Peter, I Timothy 3, a biblical survey of church leaders, as well as valuable introductory and closing chapters. There are also 7 appendices.

Because of the clear writing and explanations, this book is accessible to the interested lay person but I think it would too overwhelming to someone new to the debate. If you are new to the debate, I’d begin with another book (such as this one) before reading Bartlett.

I have read exceptional books on this issue (such as titles by Payne, Keener, Westfall) but Bartlett will now be the book I most highly recommend for a combination of reasons such as its readability, thoroughness, and diplomacy.

Diplomacy. The beginning of the book emphasized that Bartlett wanted to help bridge the divide between complementarians and egalitarians, and that both sides must be open to critique – and he would indeed critique both sides as the book progressed. I think Bartlett was fair. When he critiqued a certain position or interpretation, you can not accuse him of unfairly doing so. He is not just nitpicking, but demonstrates the validity or significance of his concern about a certain interpretation. Sometimes Bartlett found problems with both the complementarian and egalitarians arguments, and provided fresh insight or took a new approach – in particular with 1 Timothy 2 – which is a challenging passage. He also implores both sides to stop certain unfair representations of the other side’s positions or motives, and to move closer together. Indeed, certain people on both sides can be guilty of polarizing, exaggerated, unfair distortions.

Bartlett says that some of his own opinions changed as he researched and wrote this book, as he followed the evidence wherever it lead him. I can only “disagree” with one thing in this book. In chapter 1, he summarizes that the conclusion of the book “will be that the complemementarian and egalitarian positions are each partly correct and partly mistaken” (page 16). Well, in a general sense this is accurate, because, as said, he sometimes pointed out strengths and weaknesses in the arguments on both sides. However, I would describe the book’s conclusions this way: The complementarian position is a little correct and mostly mistaken, and the egalitarian position is mostly correct and a little mistaken.

Well, I suppose some reading this will now come to the conclusion that Bartlett was just an egalitarian in disguise and tricked his readers by this so-called arbitrator approach. If you actually read the book, however, I do not see how you could possibly come to that conclusion!!  Men and Women in Christ is worth your time, effort, and money to obtain and read.

While I will now end my review, I plan to have 1 or 2 more posts where I comment on specific content of the book. So check back!! Thanks for taking the time to read my review. [ Post on Priscilla here, and on ezer here.]

12 thoughts on “Book review: Men and Women in Christ by Andrew Bartlett”