I am finally back on a roll with book reviews. Did you see my review on Saturday?

I appreciate a book that can “trick” people, who don’t normally like to read more theological or historical works, into reading such! Meaning that the author writes in such a conversational and engaging way, keeping the reader’s attention, that the reader does not realize that they have been learning theology or history! This is one of those books 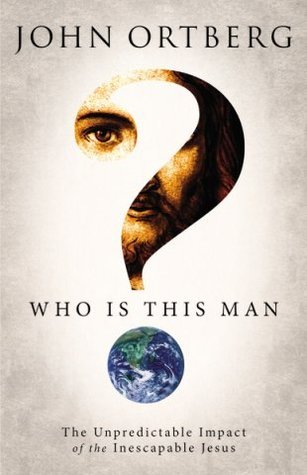 Who is This Man?
The Unpredictable Impact of the Inescapable Jesus
by John Ortberg, Zondervan, 2012

Ortberg’s book is endorsed by Christians as diverse as Dallas Willard, Jeff Foxworthy, Shane Claiborne, Tony Campolo, NT Wright, Philip Yancey, and Max Lucado! That tells you something. Add my important name too (haha) as I truly found this a worthwhile book.

In one sense it is an apologetic book, because a better grasp of the impact Jesus has had on this world should challenge unbelievers or skeptics to more thoughtfully consider Christianity. The impact of Jesus on this world is phenomenal, almost hard to fathom, and should point to the fact that Jesus was not just an ordinary man who somehow managed to leave a lasting impression, but that Jesus was much more: He was the unique, one-of-a-kind, God-man. This should also challenge believers to take their faith more seriously, and live a life that honors their Lord.

Each chapter skillfully covers areas of life or culture – such as the value/dignity of  human life, treatment of women, education, art, science, medicine, social virtues – and shows how Jesus transformed these things. The life of Jesus swept over history, inspiring and changing culture.

We may not realize how tremendously Jesus changed things, as we live after the changes took place. Chapter 6 is entitled “Jesus was not a great man” and points out how Jesus was anything but great by the norms of “greatness” in the ancient Greco-Roman world! Humility was not an admired quality. Honor and rank was important. Jesus did not seek honor, served others, humbled himself, and ultimately died a shameful death on a cross. The life and death of Jesus was in contrast to greatness in the Greco-Roman culture.

“What may be the earliest writing about him [Jesus] said that ‘he humbled himself.’ In the Roman Empire, someone might be humbled, by losing money or status or title. No one deliberately humbled himself.  Until now.”   (page 82)

“Australia’s Macquarie University did a research project exploring how humility went from a despised weakness to an admired social virtue. ‘The conclusion was clear: the modern Western fondness for humility almost certainly derives from the peculiar impact on Europe of the Judeo-Christian worldview. This is not a ‘religious’ conclusion; Macquarie is a public university…It is a purely historical finding.'” (page 84)

Now some rambles from me. Christianity developed certain problems in the 20th century because Christianity took on ideas about “greatness” that align more with ancient Greco-Roman norms than with our Lord Jesus! I wrote a book that addresses this, in part. The seeds were sown in the late 1800’s and in the 1900’s Christianity slowly took on a self-focus with an emphasis on personal achievement and success. God became like our personal cheerleader to fan the flames of our ego and help us get what we want in life. This is NOT Christianity. Thus the title of my book: Positively Powerless, How a Forgotten Movement Undermined Christianity. Christianity was undermined: humility became a weakness! But in Christianity we become great by realizing we are not-so-great. “Blessed are the poor in spirit…and the meek.” Much about Christianity is paradoxical.

But back to the current book review…Lest you think the book only shares the positive things Christianity has done for this world, Ortberg does not evade the negative. He admits that the church has at times failed to live up to the example of Jesus. In chapter 9, he talks about hypocrisy:

“The movement that Jesus started produced many hypocrites. Given that there are over 2 billion or so Christians in the world, maybe Christianity produced more hypocrites than any other movement in history. Religious hypocrisy is one of the great barriers to faith for any thoughtful person.” (page 117)

The last 3 chapters of the book are entitled: Friday, Saturday, and Sunday. Each respectively focuses on the day Jesus died, the in-between day, and the day he was resurrected from the grave. I thought it was so helpful to include a chapter on Saturday. We forget about that day, don’t we? That day when all hope seems lost.

One reason I can avoid writing book reviews is I fear not being able to really help you sense the worth of a book. So I will end by sharing NT Wright’s description, which captures it so much better than me:

“One of the big lies of our time is that Christianity has been part of the problem rather than the source of the solution. Most people today don’t realize that things we now take for granted, like education and health care, were reserved for the rich elite in the ancient world until the Christians insisted on providing them for everyone within reach. Many imagine that Christianity was bad for women, whereas early Christianity provided the biggest transformation of attitudes to women the world has ever seen. Ortberg tracks these and much, much more back to Jesus himself. As a pastor, he knows very well that the church often gets it badly wrong. But the impact of Jesus on the whole world, even when his followers have been muddled or misguided, towers breathtakingly over all human achievement. This book provides enormous encouragement both to celebrate what Jesus’ followers have done in the past, and to stimulate a fresh vision of our mission in the future. And, above all, to be amazed and awed once more at Jesus himself, who lived, died, and rose to launch such a transformative vision.”

Yes – this book will help you be amazed and awed once more at Jesus himself!

1 thought on “Book review: Who is This Man? by John Ortberg. Be amazed once more at Jesus.”