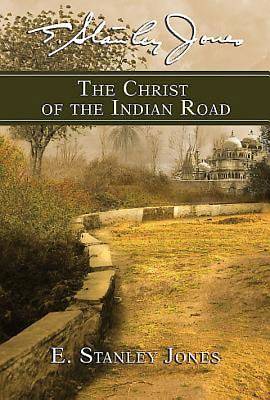 E. Stanley Jones. Somehow I had never heard of Jones until recently, when I read an article about him in the print magazine Good News – the publication of a distinctly evangelical group trying to bring renewal within the United Methodist Church. I was quite fascinated by Jones after reading the article, and wanted to read a book by him. I chose: The Christ of the Indian Road, Abingdon Press, 1925. Available here.

E. Stanley Jones was well known in the first half of the 20th century. In 1938, he was identified as “the world’s greatest missionary evangelist” by Time magazine. He has also been called the Billy Graham of India. His work was in India.

This book is not a autobiography of his life but rather an explanation of the approach he took to sharing Christ in India – yet you certainly do become familiar with his mission work and experiences. The back cover offers a succinct description:

“E. Stanley Jones…attempted to contextualize Jesus Christ within the Indian culture. He names the mistakes many Christians make in trying to impose their culture on the existing culture. Instead, he makes the case that we can learn from other cultures, respect the truth that can be found there, and let Christ and the existing culture do the rest.”

When I first finished reading the book, I shared this on a social media site:

“Wow. Just finished reading The Christ of the Indian Road by E. Stanley Jones, copyright 1925. This may well be my #1 book of the year! A profoundly Christ exalting book. Lift Jesus high, and other things will fall into place as they should.”

So, in case the back cover summary sounded a bit dull to you, it is not a dull book but a profoundly Jesus exalting book. It is a book worth re-reading, for more than one reason. Not only does it exalt Jesus, but it gives much food for thought about evangelistic and mission work that still applies to us today. It remains relevant, even as we approach 100 years since its publication.

Christians can confuse cultural standards or norms with biblical standards. We can force ways of life on others, ways that are American or Western, and not necessary to Christianity. Christians can also have the tendency to look on other religions only in a negative light or have a superiority complex, yet there is good (and bad) in all religions and cultures. We can also be focused on side issues and end up neglecting Jesus – whether we realize it or not.

We need to approach evangelism and missions work with more humility, with our eyes wide open to the problems in our own culture and our own expression of Christianity. Instead we often overlook any flaws on our side, while pointing out the negatives of the other religion or culture. Others can often sense when we have a condescending attitude towards them, and this hinders our gospel witness. We also need to keep the main thing, the main thing – and that is JESUS.

Of course, some of these things can make Christians nervous. Is Jones advocating some type of pluralistic view? If we emphasize that Jesus is all that matters, doesn’t that mean Indians could just add Jesus to their plethora of gods? If we have a “Jesus only” focus does that mean doctrine does not matter? What about doctrine?!

Jones does not advocate any of these things. He is biblically sound. While I did not keep count, many times in the book Jones said “Do not misunderstand me” and he would then clarify and further explain a point – addressing concerns such as those mentioned above.

Jones mainly worked among the educated and high castes of India. He was friends with Mahātmāh Gandhi and other Indians involved in the Indian independence movement of that time. He would go around giving talks, welcomed to surprising venues, and was always open to questions and discussion from those in the audience.

I feel my review does NOT do this book justice. I highlighted much content, or made marks in the margins. I was constantly challenged by the thoughts he shared, as well as being continually reminded the importance of lifting Jesus high.

I’ll end with an excerpt that remains relevant to current times. Racism and prejudice HURTS the cause of Christ. The ripple effects go far.

Remember that it was Gandhi who said that he would consider becoming a Christians if it wasn’t for Christians. Other Indians interested in Jesus at that time expressed similar. Some of the things they observed in Christian culture was disturbing to them. One chapter deals with “the Great Hindrance” to evangelism: western racism. Jones described what happened one time while speaking in India:

“At question time a voice came out of the back of the crowd, ‘What do you think of the KKK?’ This was about four years ago, when I had scarcely heard of the Klan myself. But here in the backwater of India, a place where I thought the least from the outside would penetrate, the loud speaker was speaking and was embarrassing our witness and message…”

4 thoughts on “The Christ of the Indian Road, book review”