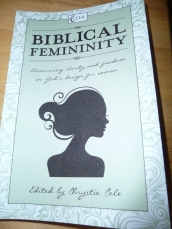 Apparent new cover of the book.

*This review is an abridged version of what was originally a 3-part review. If you want to read the longer review, part 1 is here.*

This book is from a complementarian perspective, yet there are some positives which set it apart. The book’s approach attempts to be inclusive to all women. “Biblical femininity” (so-called) will look a little different in the lives of individual women. Not every woman must be a stay-at-home mom. An effort is made to include single women, and not make them feel deficient. Women are encouraged to not find their identity in their role in life (typically wife or mother) but rather in Christ. I agree. While Biblical Femininity attempts to be diplomatic and avoid extremes, the remainder of this review will be critical.

The book is based on faulty exposition of Genesis 1-3 and imposes things on the Scripture that is simply not there. When the foundation is off it leads to conclusions that are also faulty. Another key problem is the indoctrinating approach. Instead of encouraging women to think, they are told what to think. Some concepts are presented as fact, without explanation of how “the fact”  was reached in the first place. That is wrong. Especially since presuppositions, presented as a given, are not a given. A presupposition required analysis and interpretation before it came to be a presupposition in the first place. It is patronizing to provide minimal info or leave out explanatory information.

Page 40 says that the serpent “turned the tables on God’s created order, circumventing Adam and addressing Eve instead.”  – Created order? This presupposition should be explained. Because Adam was created first, some see this as evidence of the man having special status and privilege (primogeniture). Yet, there is no evidence of primogeniture until a considerable time after creation, and this is retroactively imposed on the creation account.

In addition, the biblical norm was often not primogeniture, but God blessing or specially using those born later – such as Isaac, Jacob, Joseph, and David. Some state that because Adam named Eve that this shows him having special authority over her. However,  in the Bible, the act of naming does not necessarily imply authority. For example, Hagar (the Egyptian slave of Abraham and Sarah) gave God a name! Does that mean Hagar had authority over God? I hardly think so. And both men and women named children in the Old Testament. There are 25 instances of women naming children, and twenty by men. If this demonstrates authority, it is a joint or shared authority by men and women.

The book states “Where Satan reversed created order by approaching Eve, God affirmed his created order by going first to Adam.” (page 42) Because God went to Adam first after the Fall, is this proof that Adam was in charge of Eve? Note that God addressed Adam as an individual, and then God went to Eve separately and questioned her as an individual. (Genesis 3: 8-13). God did not hold Adam accountable for what THEY did, but for what HE did.

EVE DID NOT NEED A SPOKESMAN. They were both treated as separate moral agents.

Furthermore, if Adam was the authoritative leader in Genesis 1-2, then the judgment on Eve after the Fall of “he will rule over you” would have been pointless, since it would have brought no change in status! Please ponder that.

The clear implication of conferring rulership to Adam after the Fall is that he was NOT Eve’s ruler prior to the Fall. While man indeed emerges as ruler in Genesis 3, this is the sad result of their sin and their ensuing judgments. It is certainly not an ideal to be followed or emulated! In Christ, men and women are to move beyond the curse, and be an example of relationships that have been redeemed.

“God affirmed his created order by going first to Adam.” – So does God always go to a man first? No. Even in the patriarchal Old Testament times, God spoke directly to women, or used an angelic messenger, such as with Rebekah in Genesis 25, Hagar in Genesis 16, or Samson’s mother in Judges 13. Was GOD being “satanic” by reversing the created order and approaching women? And God used women to speak TO MEN on his behalf such as with Deborah in Judges 4, Huldah in 2 Chronicles 34, and the wailing women in Jeremiah 9. (There are examples in the New Testament, but the emphasis here is the Old.)

The book quotes Genesis 1:26-27, but interestingly verse 28 is left out. While verse 26 does say “let them have dominion” some of the emphasis is lost that is elaborated upon in verse 28. It says that God blessed them and said to them, that they are to subdue and rule over the earth.

The creation mandate is given to man and woman together. Note in the Genesis passage that there are only 2 authority structures: God over all creation, and man and woman’s joint authority over the earth. Their dominion was directed towards creation, and not toward each other.

Again, there is nothing in Genesis 1 and 2 to indicate that Adam was the responsible one, the leader, or authority figure. There was joint authority and they were to co-rule the earth as God’s representatives. As Christians, this should be our model, not the curse of Genesis 3.

The book teaches that the God-ordained role of women is to be the helper of male leaders. Eve is indeed called the helper of Adam, but to interpret this in a rigid way is illogical. Before Eve was created, Adam was alone and in a sense helpless. He needed a companion similar to Him, and Eve became the helper he needed, but not in the sense of a servant or lackey. Remember that they were commanded to rule the earth together. Adam was NOT told to rule the earth alone, with Eve appointed as his helper.

To clarify, there is nothing wrong with serving and helping others. Jesus did it, and we are to imitate our Savior. It is indeed a powerful opportunity to bring assistance and strength to others – as the book does emphasize, with good exposition of ezer.

This is actually what Christianity is all about! Christianity is about serving – no matter if we are male or female. Being a helper is not a gender role. Christian men and women alike should aim to be helpful servants.

Yet then, why this book’s UNILATERAL emphasis?

Why the obsession with men being leaders and women falling under their authority?

Jesus said we should not be obsessed with authority (Matthew 20: 20-28). It seems that certain Christian men, with their high level of concern for men being the leaders, have failed to heed the warning of Jesus.

A final concern about this book is that it teaches the core temptation or sin for women is to abandon their role as helper, becoming guilty of autonomy, by failing to come along side men or remain under the authority of men.

THEREFORE, to even consider differently than what this book teaches is to end up in…SIN! Please ponder that.

This is an insidious way for the males in power to keep their female helpers in line.

I hesitate to use the word cultish, as I live near the church that published this book, and I know they are not a cult. But when you tell certain people that to even consider differently is sin, that is an attempt to manipulate and control in a cultish way.

Jesus never treated women in this way. Jesus recognized the mental and spiritual capacity of women, just as he did of men, often encouraging women to think theological issues through for themselves. (More here.) In the Bible, there are also plenty of women who took initiative, and exercised authority.

While this book has some positives and sincere intentions, it does not meet the objective of the subtitle to bring clarity and freedom in God’s design for women. God has a broader, richer design for women – and men – than the narrow one presented in the book. I do not recommend it.