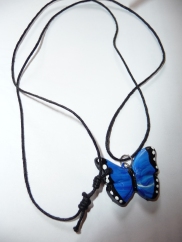 Accepting a gift can be difficult, can’t it? Recently at a restaurant I told the waitress how much I liked her butterfly necklace. She took the necklace off and gave it to me! I could hardly believe it. I protested at first, emphasizing that I did not give her the compliment about the necklace with the hope that she’d give it to me! I just like butterflies, that is all. The waitress insisted that I keep it, and her act seemed very genuine and from the heart. I was touched.

Then came time to pay the bill and leave a tip. At first I thought we should give a huge tip. Yet, that seemed like it could be a insult of sorts – my paying her for a gift she freely gave me from the heart. It would negate the spirit of her gift. Finally, we decided to just leave a good tip – about 20%.

I can remember several times in the past giving someone a gift that they were not expecting from me. A day or two later they gave me a gift back in return. Although I did not reveal my true feelings, I felt bad that they rushed out and got me something. I had not given them a gift in order to get a gift back. My intention was not to obligate them to do something for me. My gift was precisely that – a gift. I almost felt like my gift had been negated.

Some dictionary definitions of a gift: a thing given willingly to someone without payment, something voluntarily transferred by one person to another without compensation, something bestowed or acquired without any particular effort by the recipient or without its being earned.

Of course, there are times when a gift may not actually be a gift – the person is giving it for ulterior motives, or actually expecting something in return. But that is not a true gift – if we are hoping for compensation of some type.

Why is it so hard to accept a gift?

Do we feel bad that we did not think of it first? (We feel guilty because the altruistic thought and action was not our idea.)

Are we too self-sufficient? Too proud?

I’ll admit that I am better at accepting tangible gifts than acts of service. For some reason, I can usually accept a physical gift. (Although I did struggle with the out-of-blue gift of a necklace from a stranger who was my waitress!) But it is acts of service that are harder for me to accept – as in, someone giving me the gift of serving me – helping me by doing tasks for me in a time of need. I’m independent. I like to do things myself. I’ll actually hide a need, or not ask for help when I should. I don’t like to be demanding. But it boils down to pride I think – having to admit you need assistance can be difficult.

But meanwhile I think of spiritual things. It can be so hard for so many people to admit their need of a Savior…to admit they need help…to accept that help.

Can you really imagine Jesus washing the feet of his disciples? Wow. Could you have allowed Him to do it? Peter struggled with it.

We don’t need anything! We want to earn our way. We like to feel like we deserve things. Dave Ramsey is known for saying that he is “better than he deserves.” That rubs some people the wrong way. I overheard several people in a secular setting disagreeing with Ramsey. They argued that they deserved great things, and it was self deprecating to talk about being better than you deserve. They have worked hard, have good qualities, and deserve great things. Hmm, not much humility there. Yet, we are all prone to this.

Jesus said: “I have come to call not those who think they are righteous, but those who know they are sinners and need to repent.” (Luke 5:32)

“Humble yourselves before the Lord, and he will lift you up.” James 4:10

We are sinners in need of salvation. If we are boasting in anything, it should be in Christ and what he has done for us. Yet, here we go. This is difficult for so many. Can we humble ourselves? Admit our need? Accept God’s gift of salvation through Christ? The way of salvation is easy…yet also so hard.

Even believers struggle with this. It is so easy to start focusing on our work for the Lord, rather than on the Lord. Or we think we merit blessings because we have obeyed, or deserve God’s favor in return for our service. Yet that is not how things always work. Jesus’ obedience brought him suffering and death on the cross. We need to keep living in light of the mercy and grace demonstrated for us in Christ, realizing we are people who still need that grace and mercy every day.

Thanks for listening. More here: Cultivating the art of receiving…rather than giving?

7 thoughts on “Can you accept a gift? The way of salvation is easy, yet also hard.”